The University of Queensland R.D. Milns Antiquities Museum is a collection housed on the St Lucia campus of the university. It was built to further the study of the classi- cal civilisations of Greece, 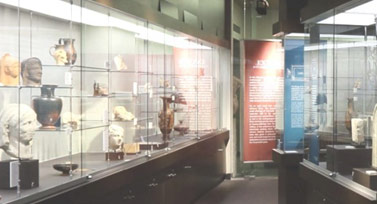 Rome, Egypt, and the Near East by secondary students, tertiary students and re- searchers as well as the gen- eral public.

James will speak about vari- ous projects being undertak- en by the Museum, including his current research into an- tiquities (some of which are forgeries) brought back to Australia by returning WWI

He will also discuss past exhibitions staged by the Museum, and will also speak about the Museum’s Ongoing Exhibition “Egypt: The Land of the Pharoahs’’, which James curated in partnership with fellow researcher Dr Janette McWilliam.

Arrive at 10.00am when the WTBC opens to enjoy a quick cuppa and biscuit for morning tea before the formalities commence. Please assist by bringing your own cup or mug.

(Note: It might be an idea to put a label on your mug with your name on it in case you forget to take it home again. )

Cold drinks can be purchased from the WTBC bar when it opens from 11.00am.
You are welcome to stay for a chat and a second cuppa (or a cold drink from the bar) after the meeting.
There is a bus stop at the corner of Orchard and Bywong Streets. Route 470 bus departs Toowong Village at 10.10 and arrives at Duke Street at 10.17am.

For inquiries, RSVP and apologies please either email, send a text or phone and leave a message: T: 0401 180 092 or E: [email protected] www.toowonghistory.org.au